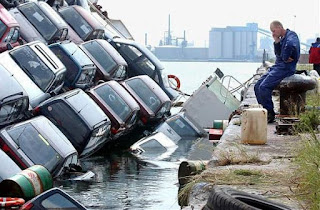 More than 50% of business decisions end in tears, some more spectacularly than others! In today's VUCA world (volatile uncertain,  complex, and ambiguous) business leaders are under pressure to act quickly and make the "right" call. So how do they get it so wrong so often, and how can you beat the odds?

In the early 1970s, Ford Motor Company's charismatic CEO, Lee Iococca wanted a "2,000 pound car for $2,000". The result was the Ford Pinto, a popular compact car designed to beat the Japanese automakers at their own game. But there was a problem. The position of the gas tank meant a rear-end collision could easily rupture the tank and cause a fire. Engineers came up with a fix but it was going to cost about $11 per vehicle, which would amount to $137 million over projected sales of 12.5 million vehicles. Instead, Ford conducted a cost-benefit analysis on the litigation costs due to likely deaths and severe burns of drivers and passengers and arrived at an estimate of $49.5 million. They decided not to fix the cars. Ford's "profit drives principle" philosophy at the time blocked production staff from voicing the risk.

In the 1990s, Shell wanted to decommission the floating oil storage tank, Brent spar, used in the North Sea Brent oil field. They sought and received government approval to sink the rig in deep water. But just before disposal was to begin, Greenpeace activists began a high-profile publicity campaign. The activists flew to the spar by helicopter and boarded it, prompting a media feeding frenzy. Shell officials successfully argued the economic and legal case for deep water disposal as the best option, but they lost public support and incurred significant reputational damage. In the end they were forced to decommission the rig onshore.

Wells Fargo is the world's fourth largest bank by market capitalization and the third largest bank in the US by total assets. “Eight is great” was a saying that was the foundation of an aggressive cross-selling target scheme advocated by CEO John Stumpf in the Wells Fargo retail-banking division. Employees had to reach “eight is great” targets in order to earn commissions and avoid termination. In 2015, the Los Angeles City Attorney filed a lawsuit against Wells Fargo based on the Bank’s alleged fraudulent and abusive sales practices. They were finally compelled to pay $185 million in penalties. It transpired that 5,300 Wells Fargo employees had been terminated between 2011 and 2016 for sales practice violations that included opening over two million unauthorized deposit and credit card accounts and charging some of their customers fees for these unauthorized accounts.  John Stumpf was forced to resign in 2016. His successor, Tim Sloan was also forced to step down in March 2019 after a further 1.4 million false accounts were discovered.

After 20 years collecting and studying strategic decisions made by senior leaders in corporate, government and non-profit organisations, professor of management at Ohio State University, Paul Nutt concludes that the process by which the decision is made matters more than the eventual outcome. Decision processes driven by a single idea were more than four times likely to fail as those governed by the more time-consuming process of discovery and evaluation of the best ideas to suit a shared outcome.

As Ikujiro Nonaka and Hirotaka Takeuchi point out, the difference between a good decision and a wise decision is the difference between asking, "what's in it for me?" rather than the question "what's good, right and just for everyone?" This takes time and requires considerable thought. Daniel Kahneman says we don't easily adopt this mode of thinking because it's effortful. Far quicker to rely on experience and "gut feeling", what he calls System 1 thinking. But even when we need to slow down and analyze the data and make reasoned decisions (what Kahneman calls System 2 thinking) we still don't necessarily know how to judge goodness, or grasp the essence and context of the issue before us, particularly when there are no defined right or wrong answers. For this we need a 3rd System of thinking.

The WISE template is a process for applying the 3rd System of thinking to help make effective decisions in complex circumstances. It helps to circumvent logical fallacies and cognitive biases, enables us to consider likely consequences in the short- and long-term, and it challenges our thinking to find outcomes which are good for society as well as the organizations we work for.

Time pressure pushes us into grasping the first viable option. Often, there seems to be a stark choice - choose A or B. It requires much less effort to narrow the field down to a simple duality of options and then choose the least disruptive one. However, the truth is that there are many alternative scenarios that exist in "possibility space". We just have to step back, take some time, and widen the scope of our search for different approaches to the issue.

Useful questions to ask yourself include:

We make assumptions and jump to conclusions too readily. Is the reality I'm seeing the same as the reality you're seeing? Acknowledging the context and the "territory" within which the issue sits is an important prerequisite to knowing how best to evaluate the various options and which tools to use.

Ask yourself these counter-intuitive questions:
Sense what is emerging

Contrary to intuition or System 1 thinking, we need a way to move past the fluttering of emotion and allow a deeper understanding of the nature of the issue. Professor Otto Scharmer from MIT calls this "presencing" - observing the problem and sitting with it to see what insights emerge. The more complex the issue, the more we need to pay attention to emergent properties. Our familiar tools and resources for "fixing it" won't work.

Take the time to ask yourself these questions:
Enact a way forward

However, it's possible to be too contemplative about the problem and not do anything about it. We need to take action. The best way is through a series of experiments, pilots, or prototypes to explore what will most likely be the best action to take. This is exactly what entrepreneurs do, they "fail forward and fail fast". Only through taking some kind of action will we learn what works and what doesn't - the essence of innovation.

Here are some questions to ask to shape your action steps:
If the decision you are facing is a big one with significant impacts and multiple ways in which it could go terribly wrong, then the WISE template may offer a way to filter out the noise and deeply consider the consequences. Even if the outcome doesn't always match your expectations, you are more likely to make a wise decision using this process!
Posted by Peter Webb at 9:01 PM