How to Boost Your Creativity! 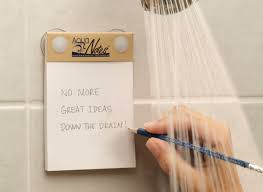 Why do we get our most creative ideas in the shower?

OK, it might depend on when and how you have your shower (and who with). But that's beside the point. Our minds never stop working, chattering away incessantly. Which is why the shower works. It's a relaxing, solitary, and non-judgmental environment that allows your mind to wander freely, connecting with your inner stream of consciousness and daydreams.

But how do you get creative in the first place? Here are 5 ways to boost your creativity:

A recent study of musical improvisation in rap artists showed a marked shift in brain  activity while subjects were creating lyrics. Brain patterns associated with motor activity arose in the absence of conscious monitoring and volitional control.

In other words, to get creative you need to relax the 'executive functions' of the brain, allowing more natural de-focused attention and uncensored processing. Here are 5 ways to do it:


1. Go for a walk
Our best 'divergent thinking' comes from walking. A Stanford University study found a person's creative output increased by an average 60% when walking compared with just sitting. And it doesn't matter where you walk - around the office, around the block, or on a treadmill.

2. Be bored
We are so tethered to our devices. They demand attention from us like needy children. They sap us of independent thought. Shut down the deluge of emails, tweets, Facebook and Instagram updates and simply let your brain "space out" for a while. Boredom is a lost art. And there seems to be an intersection between boredom and creativity.

3. Colour
There's a reason colouring books for adults have taken off. When you focus purely on the task of colouring you're being mindful. And when you move rhythmically for an extended period of time it becomes a kind of meditation. It's also an exercise in exploring your own artistry. So when you need to boost your creative juices, break out the colouring pencils!

4. Brainstorm when you're tired
Just when you're about to fall asleep at night or when you feel the 3pm siesta beginning to take over is actually a good time to brainstorm. Keep a pen and paper beside your bed for when an idea hits. When you're tired and less-focused you're not able to filter weird thoughts so easily, so let go and let loose!

5. Reminisce
In a 2015 Journal of Experimental Social Psychology report, subjects who engaged in nostalgia relative to control subjects showed a boost in creativity in a writing task. This occurred above and beyond personality factors. The mere act of reverie for the past turns out to be an effective mediator of creative endeavours. So take a look through old photos or simply reminisce about interesting events in your life.