Bank On It: How the Financial Services sector must bring wisdom to decision making 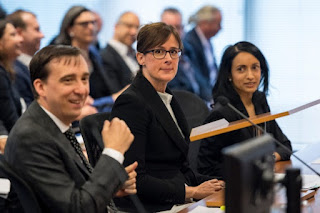 The Hayne Royal Commission in Australia has upended the central myth of the financial services sector that "greed is good". As if we learned nothing from Gordon Gecko, the central character portrayed by Michael Douglas in the 1987 movie "Wall Street", and by Stanley Weiser in the 2010 sequel. The script is too real to be entertaining any more.

The Final Report of the Royal Commission into Misconduct in the Banking, Superannuation and Financial Services Industry was released this week, and it presents an eye-watering litany of misdeeds, misappropriations, mismanagement, and missed opportunities for reform. Both business and government leaders appear to have been sitting on their hands while customers were routinely fleeced of their money. How did this become so seemingly normal?

In 2010, German researchers found strong evidence that cognitive bias most likely contributed to the decision making which led to the global financial crisis of 2007-2009. The Hayne Royal Commission report arrives at a similar conclusion that business-as-usual clouded judgement at best, and at worst led to intentional deception.

While the report's recommendations call for regular checks of culture and performance bias, in practice this goes to the heart of how we make decisions, for whom we make decisions, and the context of our decision making. In 2011, Daniel Kahneman, the father of behavioural economics, popularised the idea that we think both fast and slow about problems before we make decisions. He described System 1 thinking as intuitive and quick to make assumptions, while System 2 thinking is rational and calculating and therefore slower. Both systems are subject to bias, particular when our environment is loaded with cues about how we are expected to behave in order to fit in. But is it possible to exert enough willpower to overcome cognitive bias each time we make an important decision?

Contrary to Daniel Kahneman, there is a Third System of thinking, which my colleague Dr Barry Partridge and I discovered while researching decision making bias at the University of Wollongong, 2010-2015. System 3 turns out to be slow and calculating like system 2, but it has some of the emotional characteristics of system 1. Depending on the nature of the decision, it seems we first jump to conclusions based on our experience (system 1), then we analyse the problem to rationalise our conclusions (system 2).

However, if the problem is outside our experience, or is intractable, or if we are faced with a dilemma for which there are no clear right or wrong answers, then system 3 kicks in. This is where we "think from the heart" using a first-person perspective to sift the data through our emotions, discern the reality of the various impacts of the decision on others and ourselves, and consider deeply the wider consequences both short and long term.

Our blindness to this Third System of thinking leads us to either make intuitive leaps of faith, or overly rely on analytical tools when confronted with complex problems. Experience teaches us how to use system 1, and business schools train us in system 2 approaches. But there is no training for how to apply the Third System. Japanese business experts, Ikujiro Nonaka and Hirotaka Takeuchi nominated this deficit in training as one of the foremost reasons for the global financial crisis. We have forgotten it seems, to train for wise leadership, and we need it now, more than ever.

Ethics training for business leaders is a necessary but not sufficient prescription when it comes to preventing the kind of ongoing toxicity and corruption unearthed by the Hayne Royal Commission. But it's a system 2 approach to changing corporate behaviour, and so far it hasn't worked, at least not sustainably.

Of greater effect would be training in the Third System of thinking. This is more likely to lead to the type of decision making Aristotle referred to as phronesis, or practical wisdom - the ability to make prudent judgements and take actions based on the reality of the situation, guided by values and morals; to know what is the right thing to do for the right people at the right time. But can practical wisdom be trained?

Yes, it can!
Building on these and other discoveries, my own research and practice in the field of wisdom psychology suggests that system 3 thinking is made up of 9 capabilities which can be developed in much the same way that emotional competencies can be enhanced through training and coaching.

The 9 capabilities of the Third System are:

Experience is a necessary but not sufficient condition for wise thinking. Martin Seligman launched the field of positive psychology, demonstrating ways in which we can curate our memories and appreciate the course of our own life as a useful guide to what it means to live a flourishing life. By recognising the normal trajectory of human development through our own and others' biographies we may come to be relied on for giving advice about life problems.

Paradoxically, an important capability of the Third System is acknowledging uncertainty and ambiguity, yet making quick and effective decisions; not suffering "paralysis by analysis". Under complex conditions decision making is actually a series of experiments in which we learn something new. We should not be fearful of making mistakes but rather accept the entrepreneurial "fail forward" principle. This is also the process of enacting and prototyping advocated by Otto Scharmer in his Theory U.

3. Emotion Regulation
Daniel Goleman popularised the notion of emotional intelligence in the 1990s. It turns out one of the most critical capabilities of the Third System is to recognise your feelings, yet not be overwhelmed by them. Control over emotions is not the same as the absence of emotions but rather having control over the intensity and variation in them, which yields a kind of contentedness.

System 3 thinking emphasises understanding how others are feeling, imagining what it must be like for them, and being prepared to take action through a strongly held sense of fairness. Robert Sapolsky from Stanford University School of Medicine leads other Evolutionary Biologists in observing that cooperative prosocial behaviours are more favoured in primate and human groups than competition and violence.

Chris Petersen and Martin Seligman founded the Values In Action Institute after identifying 24 character strengths and virtues we all possess to a greater or lesser degree. Acceptance of diversity allows for our own unique signature strengths, but also opens us up to understand why someone else might rely on different strengths. The key to system 3 thinking appears to be having strong values "weakly held" which means we are more prepared to change our mind if new information presents itself.

"Man's Search for Meaning" is a 1946 book by Viktor Frankl chronicling his experience in Nazi concentration camps during World War II, and describing his psychotherapeutic method, which involved identifying a purpose in life to feel positively about, and then imagining that outcome. Finding meaning in the midst of disruption and volatility is about moving beyond the physical and the ego, and knowing the inner spirit essence of life, it is about seeing the world from a universal perspective. Self-transcendence is a spiritual concept that looks at the true meaning of life and the infinite consciousness.

Insight is the capability to see into a situation, to apprehend the inner nature of things. It includes self-reflection, which is the ability to acquire an authentic and meaningful perception of a thing or an individual, including yourself. Leadership experts, Jack Zenger and Joseph Folkman present empirical evidence for why it is important to know yourself in order to make accurate assessments of your impact on others and to make better quality decisions.

In their 2018 book, "The Mind of a Leader", authors Rasmus Hougaard and Jacqueline Carter  highlight the debilitating effects of distraction on decision making effectiveness. Mindfulness is the skill of applying sustained, focused attention to meaningful tasks and activities, balancing mental activity with mental control. Cultivating the ability to find mental stillness in the midst of noise can enhance productivity and creativity.

According to His Holiness the 14th Dalai Lama of Tibet, compassion is the key to happiness. Compassion is the feeling that arises when we are confronted with another's suffering and feel motivated to relieve that suffering. While empathy refers to our ability to feel the emotions of another, compassion is when those feelings and thoughts include the desire to help.

Taken together, these 9 capabilities represent an altogether different way of thinking and being when faced with complex issues and wicked problems. We still need systems 1 and 2 for simple and complicated problems, but as we face technological breakthroughs and digital disruptions with unintended consequences for ourselves and for the planet, we are going to have to get proficient at fully utilising the Third System.

Through training and coaching I have found it is possible to improve the capability of individuals to successfully apply the Third System of thinking when faced with a dilemma. Although life is uncertain and there are no guarantees that any given decision will work out for the best, accepting that condition is in itself a hallmark of the system 3 thinker.

Part of the Wise Decision Making training program involves practicing a template for protecting against bias and encouraging a slower, more considerate approach to both understanding and potentially solving complex issues:

As we have seen this week from the Hayne Royal Commission report, business, community, and political leaders will need to become more sensitive to the total societal impact of their actions. It's no longer enough to justify decisions based on stakeholder sentiment. From now on, business decision makers need to make sure they deliver social as well as economic value. And to do that they will need to become practiced in the Third System of thinking.

Contact me here to book a Wise Decision Making training program for you and your team.