The Secret to Multitasking! 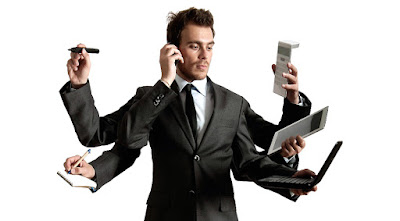 When we think we're multitasking we're actually multiswitching. That's what the brain is very good at doing - quickly diverting its attention from one place to the next. We think we're being productive. We are, indeed, being busy. But in reality we're simply giving ourselves extra work.

So, what's the secret to multitasking?

Research conducted at Stanford University found that multitasking is less productive than doing a single thing at a time. The researchers also found that people who are regularly bombarded with several streams of electronic information cannot pay attention, recall information, or switch from one job to another as well as those who complete one task at a time.

Further, researchers at the University of Sussex in the UK compared the amount of time people spend on multiple devices (such as texting while watching TV) to MRI scans of their brains. They found that high multitaskers had less brain density in the anterior cingulate cortex, a region responsible for empathy as well as cognitive and emotional control.

The secret to multitasking is - mindfulness: The practice of developing sustained, single-pointed concentration on one thing at a time. This is the 5th practice for living life wisely.

In reality, mindfulness is training the mind - your mind - to be more productive and more resilient. There are four kinds of mindfulness:

"Anywhere, anytime" is the best approach to cultivating mindfulness - fully paying attention to the task at hand, and surrendering totally to simply doing what you are doing. This is the extraordinary power of "nowness".

Try the Sky Gazing Practice as a simple method to start training your mind:
Posted by Peter Webb at 12:43 AM No comments: